Thanks very much for the good work and overall good experience.
Allen M. – Downtown Ottawa
You matched the brickwork very well and I really appreciate you colouring the new mortar so it blends with the old.
Elizabeth T. – Civic Hospital area
Excellent Work - Thank you!
Debbie E. - Stittsville
Thanks – The sills look Fantastic!
Jean S. – Westboro
We will definitely recommend your firm for this work.
Gary C. – Rockcliffe
Awesome work, looks great!
Gerhard D. – Riverside
On time and on budget! Two thumbs way up!
Rebecca L. Ottawa, ON
The work looks great - the parging and brickwork are excellent! We also appreciate the very thorough cleanup.
Robert M. – Kanata
Thanks again for the fabulous job.
Heather W. – Woodroffe Park
Great work. Thanks again.
Edward F. – Orleans
I was impressed by your entire operation, very professional, high quality work and everyone was pleasant to deal with and accommodating.
Fraser S. – Civic Hospital area
Thank you and your team for such excellent work. The guys were friendly, professional, and did fantastic work.
Pat L. – Hampton park area
Thank you for the excellent work, the chimney looks great.
Mark B. – Lincoln Heights area
Your company and crew did excellent work on the property.
Chris F. – Downtown Ottawa
We are very pleased with the result. Thanks so much.
Cleo T. – Westboro 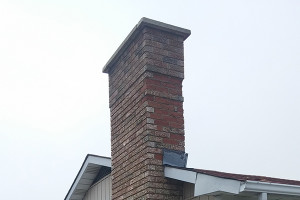 People often don’t worry about their chimneys until they start to notice pieces of brick falling from their roofs. This is when they start calling around for quotes to have their chimneys fixed, and it is often later than it should be. The initial thought is that they only need to have the small handful of broken bricks replaced, and that their chimney will be like new again. Unfortunately, this is rarely the case. We must look at the cause of the damage in order to understand what must be done to remedy it, and not have further damage occur in the near future.

Chimney damage typically starts from the top and works its way down.

It all starts with a failed cap. The cap may have a crack running through it, allowing water to run down the inside of the chimney, or the drip edge has worn away, letting rainwater run down the outside of the chimney. In either case, the cause of the damage is water saturation. The bricks take on too much water to dry effectively, and salts and minerals are able to crystallize within the brick. In the transitional months, this water freezes and thaws multiple times a day, continually expanding to allow more water in. Eventually, the bricks reach their breaking point, and crack, or spall.

Now that we know why the brick has come apart, it is easy to realize that this weathering did not just happen to a small number of bricks on the chimney. It has been happening to all of the bricks on the chimney. More at the top, than at the bottom, but all of the bricks are experiencing this cycle to some degree. The bricks that are not yet showing their damage have still gone through a lot of stress, and it is only a matter of time before they can’t hold on any longer. This is why a rebuild from the roofline is often the best course of action. It ensures that all of the damaged bricks are accounted for, and a new, water-tight, galvanized metal chimney cap is installed in order to keep the new bricks protected.

As far as below the roofline goes, as long as the flashing at the base of the chimney where it meets the roof is in good shape, the difference in quality between bricks above and bricks below the flashing is like night and day. It is not common that a chimney rebuild needs to go below the roofline. The most common time that this occurs is when there are leaky eaves troughs, or no eaves troughs at a chimney that goes through the edge of the roof.

Sometimes, when a failed cap is discovered early enough, a repoint of the eroded mortar joints is acceptable. If a chimney is in need of repointing a second time, and is still built of it’s original bricks, most often it is a good idea to start looking at a rebuild. The eroded mortar joints are evidence that a lot of water has infiltrated the masonry over an extended period of time. It is safe to say that soon enough, the bricks will start to show their age as well.

Take a look at our gallery of partial rebuilds that we’ve spotted, either while estimating to rebuild them or driving around town, by clicking here.